WHAT TO SEE - Churches

Church of St. Michael the Archangel

Church of St. Michael the Archangel 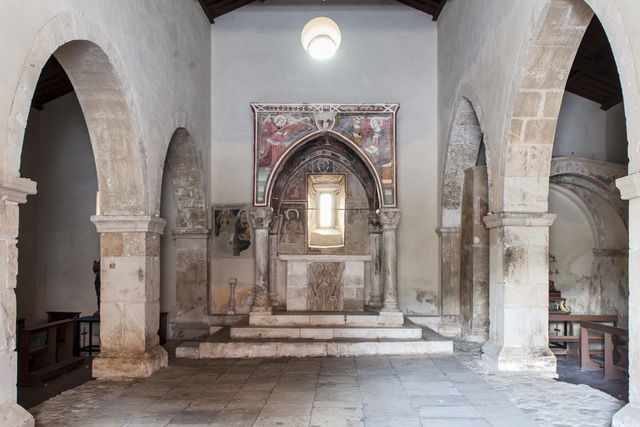 It’s very difficult to trace the exact date of construction of the church because it is the result of successive layers of building over many years.
The church, built on the ruins of an Italic-Roman temple, has a facade with a stone portal, and to either side are two small stone windows.  Another window is located on the top level in line with the portal and the Gothic bell tower remains unfinished.  The interior, almost square in shape and without an apse, is divided into three naves with pointed arches on the right and semicircular ones on the left. On the left-hand side, in line with a secondary entrance, there is a pointed arch with frescoes depicting St. Sebastian and St. Christopher.
Resting on the bottom of the central nave, is the ciborium consisting of two columns on the front and two octagonal pillars at the back against the wall.
The ciborium has pointed arches and a cross vault decorated with half-length figures of the four evangelists. The outer walls are decorated with frescoes depicting St. Ambrose, St. Catherine and the Annunciation.
Another more modest ciborium is at the bottom of the right-hand aisle and consists of two walls on which rests a rectangular vault with traces of frescoes.
The ceiling of the church is made up of exposed wooden beams that date back to 1952, when the vault was demolished by the Superintendency of monuments in order to repair the roof.
During the restoration work of 1986 the altar of the basilica was restored with an old refectory, and on the back of the rear facade of the building, a Corinthian capital from a  nearby building was added.
The church of Sant'Angelo, as it is also known as, was formerly used as a cemetery and in fact the aisle to the left of the building was used as an ossuary.